(Not your typical Ti blog!)

I would not call myself a technophobe or Luddite though I am definitely cautious about new technology.  I am, after all, typing this on my less-than-a-year-old MacBook Pro… which I like for some things like this, though of course, it sucks WAY too much of my time.  I’m sure you can relate since you are reading this on some kind of electronic device and NOT on a piece of paper.

When I was in high school, the first computers came into our (wealthy, northern VA) school, probably about 5 of them.  I was not one of the few computer geeks.  One of my good friends actually had an Apple computer in their home!  It was a novelty with a few bad video games, not as good as our Atari, as I recall.  When I went to college for engineering, I was the first year that you didn’t have to program (Fortran) using the hole-punched cards which you had to take to the computer center and someone would run your program later, give you the results on a print out, and then you had to go back and do whatever reprogramming was necessary.  I heard it was an ENORMOUS PIA (even my dad said that)!  I was in one of the first years that having a programmable calculator was required for freshman engineers, and it wasn’t yet ancient history that engineers had used slide rules.  I was also in the last year when incoming freshman engineers  DIDN’T have to have their own personal computer. (I was so happy I didn’t have to have a computer at the time since they sucked.  Remember floppy discs that were actually FLOPPY?) The year after I began, it was ONLY engineers who had to have computers, not like now.    I digress.

Fast forward 21 years.  I resisted getting a computer WAY longer than everyone else.  I was still calling people on the phone when everyone was emailing, though it was pretty much still dial-up internet at that point.  I knew eventually I would have to have a computer but waited as long as I could, when FINALLY an argument could be logically and believably made that it would save me time (not having to call the 15+ people on the list for one of my weekly classes), and a student offered his old one.  You know how it goes from there.  You can’t go back… apparently.  Technology, it SEEMS like it’s going to save time but it saps at least as much as it saves is my opinion.  And I don’t have nor will I ever have a cell phone.  You can ask Nikki.  I could say more but I digress.

OK, the point of all that back story:  I have a student (actually 2 of them, not related!) who is moving to the Philadelphia area soon.  She was saying that my classes are so good and was lamenting not having them to come to anymore, but maybe she would drive the 6 hours back for class or maybe I could do videos for the internet or do them as podcasts.   I said, “maybe they’re so good because I DON’T do that.”

I think that is the case.  I endeavor to meet and connect with actual PEOPLE in my classes, to see what individual bodies are needing in the moment and then I respond to that.  I give personal assistance.  People ask questions or sometimes make comments on what I am sharing and teaching.  Sometimes people laugh or make jokes.  We are a community of practitioners and everyone comes as they are.  One of my former students who has since been traveling for the past 3 years and was there when this student and I were having that conversation, said she always experienced my classes as a kind of dialogue with the students.

I also know for myself that a lot of the learning I have gotten from my many great teachers is simply being in their presence.  I believe and feel that there is an energy and psychic connection, even transference, whether or not it is consciously given on the teacher’s part.
ALL that having been said, I also know that many of my students have moved away, some to other parts of the country, some internationally, quite a few all the way to Durham which might as well be many states away sometimes; maybe they (some of you) would like to do some yoga guided by me in some way from afar.  And some of my classes are fairly small so maybe I should consider the “selling of yoga” options that are so popular currently, though in my mind I view most of that as what is moving us away from Yoga (real Yoga) to the small-minded focus on asana practice (think a popular yoga magazine) and yoga as business (think Yoga Alliance) rather than as holy sharing.  But maybe I’m just “old”, i.e. resistant to change.

All that is to say, “I don’t know!”  I’m not making any promises or making any commitment (I, like you, certainly don’t need any MORE things to spend my time on, especially electronically!), but I am curious to get input from those of you who might want (or not want) other (electronic) yoga options.  Is there a demand for such things?   Might it help folks out and be worth my time?  What do you think?

Best of the Triangle Finalist 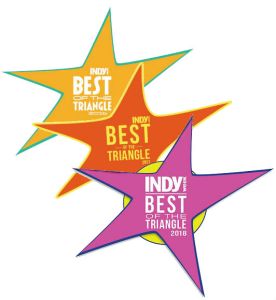